How to unblock files downloaded from Internet in Windows 10

If you downloaded a file from the Internet, Windows 10 shows you a security warning every time you try to open it. Some file types are completely blocked from opening.

When you try to open a file which was downloaded from the Internet, you can see a warning like this:

It is shown by Windows SmartScreen, a security feature of Windows 10, which causes such behavior. Thankfully, it is not hard to unblock the downloaded file. Here are the steps in detail.

To Unblock files downloaded from Internet in Windows 10

After that, the security warning will disappear. You will be able to open your files without distraction.

This is very useful when you need to unblock just one file. When you need unblock several files at once, it is very annoying to right-click on every single file, and open its Properties to unblock it. Here is an alternative solution to save your time!

Using PowerShell, it is posssible unblock multiple files at once in any given folder. It can be done as follows.

To Batch Unblock Files Downloaded from the Internet

As you can see, this is very easy. No third-party apps required. All you need is a PowerShell console which comes pre-installed with Windows 10.

The metadata which is added to the downloaded file is called “zone information”. It is an invisible file stored as an alternate data stream in the same downloaded file to indicate that the file came from a network. Every time File Explorer opens the file, it reads the attached zone info and checks if it came from “outside”. In that case, Windows Smart screen warning appears. When it is disabled, the dialog may look as follows. 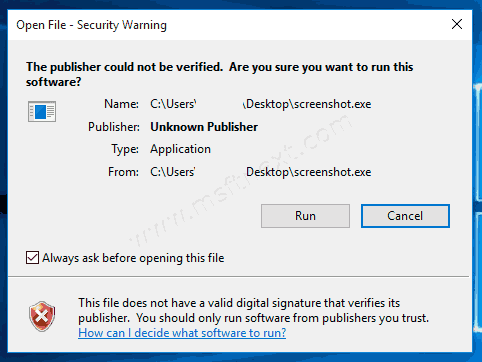 Regardless of the dialog look, it will appear unless you unblock the file.

We use cookies on our website to give you the most relevant experience by remembering your preferences and repeat visits. By clicking “Accept”, you consent to the use of ALL the cookies.
Cookie settingsACCEPT
Manage consent

This website uses cookies to improve your experience while you navigate through the website. Out of these, the cookies that are categorized as necessary are stored on your browser as they are essential for the working of basic functionalities of the website. We also use third-party cookies that help us analyze and understand how you use this website. These cookies will be stored in your browser only with your consent. You also have the option to opt-out of these cookies. But opting out of some of these cookies may affect your browsing experience.
Necessary Always Enabled
Necessary cookies are absolutely essential for the website to function properly. This category only includes cookies that ensures basic functionalities and security features of the website. These cookies do not store any personal information.
Non-necessary
Any cookies that may not be particularly necessary for the website to function and is used specifically to collect user personal data via analytics, ads, other embedded contents are termed as non-necessary cookies. It is mandatory to procure user consent prior to running these cookies on your website.
SAVE & ACCEPT