What is the DiskUsage tool in Windows 10 (diskusage.exe).

Windows 10 to get a built-in disk space analyzer tool, named DiskUsage. It is already available for testing in pre-release builds, starting in build 21277.

Windows 10 Build 21277 is a Dev Channel release which brought a new tool for testing by users. For the first time Windows includes a console disk space analyzer utility.  Microsoft has quietly added to the OS.

What is the DiskUsage tool

This app can scan your  folders or even entire drive and display the used space by each folder.

You can find the DiskUsage binary is located at C:\Windows\System32\diskusage.exe. It includes a built-in user guide which you can see by running diskusage /?.

Let's take a look on how it works.

How to use DiskUsage on Windows 10

When running Disk Usage without specifying command line arguments, it will display file and folder sizes in bytes. It is not useful to be read by humans. To display size in more traditional units like MB, GB, etc, add the /h switch. See the screenshot below.

To find directories in C:\Windows that are larger than 1GB, type and run the following command:

In the above screenshot Disk Usage has displayed all folders which take more than 1GB on the drive.

Disk Usage also includes a few switches to list the top N folders and files on the drive or in a directory.

Unfortunately, the above commands are buggy and doesn't show what they intend. 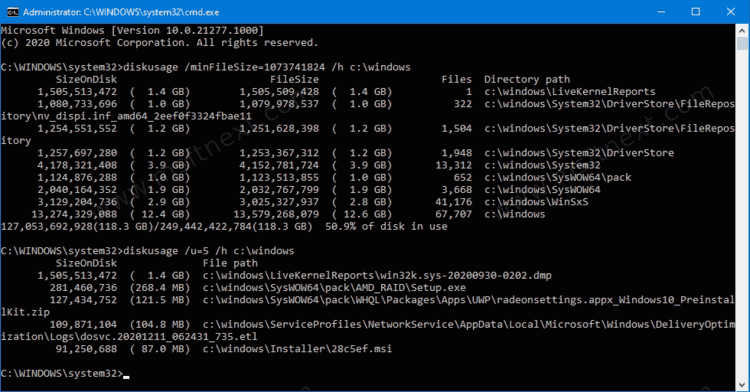 Finally, Disk Usage allows specifying a configuration file that will keep defaults for the options you want to always use with the app, e.g. the /h switch. You can also customize the output and exclude certain files and folders from being processed.

While DiskUsage is still under development, and doesn't work like a charm yet, it is a great fact that such a tool is already in Windows 10. The official announcement would shed some light on it.

One small request: If you liked this post, please share this? One "tiny" share from you would seriously help a lot with the growth of this blog. It won't take more than 10 seconds of your time! Share on RedditShare on FacebookShare on TwitterShare on LinkedinShare on Pinterest

We use cookies to ensure that we give you the best experience on our website. If you continue to use this site we will assume that you are happy with it.Ok